Dow Futures Are Flat Today – But the Fed Has a Plan

Dow futures traded narrowly lower on Wednesday after the index snapped a three-day winning streak on Tuesday. Some Federal Reserve officials are growing concerned a “double-dip” recession could batter the U.S. economy. Fed Chair Jerome Powell has a plan – but will it be enough?

U.S. stock futures diverged on Wednesday, mirroring their performance from the previous session. The S&P 500 and Nasdaq are poised to climb to new highs, while the Dow Jones Industrial Average (DJIA) is trading narrowly in the red.

More Warnings About a Double-Dip Recession

While White House adviser Larry Kudlow used his speech at the Republican National Convention to trumpet what he called a “V-shaped economic recovery,” there are escalating fears that the U.S. economy will succumb to a double-dip recession.

In other words, the economy could briefly escape from one recession, only to stumble directly into another as growth contracts again.

Count Kansas City Federal Reserve President Esther George as sympathetic to the pessimists. She told CNBC today that although she forecasts continued economic improvement, everything hinges on the unpredictable trajectory of the COVID-19 pandemic.

Watch her remarks in the interview below: 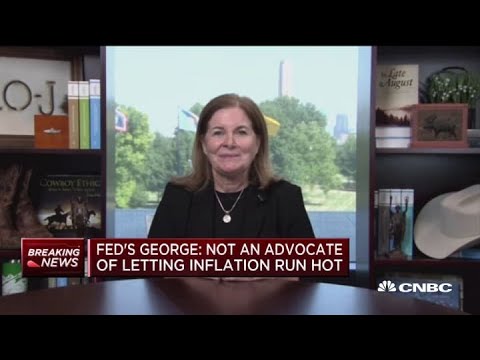 That makes a double-dip recession an “important risk” to her baseline outlook.

And it raises the stakes as Fed Chair Jerome Powell prepares to make what analysts are already calling a “historic speech” at the virtual “Jackson Hole” symposium tomorrow.

A New Fed Policy Could Juice the Dow – But Will It Help the Economy?

After decades of fighting inflation, the Fed appears poised to concede that the game has changed. Inflation has been so low for so long that Powell will likely advocate for “average inflation” targeting.

Rather than guard the 2% annual inflation target like a hawk, the central bank would allow it to “run hot” temporarily to stimulate economic growth and promote employment. The Fed wouldn’t scrap the 2% target – it would just seek to average 2% inflation over the long-term rather than on a yearly basis.

Practically speaking, this likely means that the Fed will hold interest rates near zero almost indefinitely.

That’s something investors are sure to cheer, at least in the short run. The Fed’s aggressive pivot toward softer monetary policy is one of the primary reasons why the S&P 500 and Nasdaq are trading at record highs and the Dow is on the verge of joining them.

This doesn’t mean average inflation targeting will be an easy sell. Especially since it appears to be meeting some resistance within the Federal Reserve itself.

I’m not an advocate of letting inflation run hot, because I’m not sure what people mean by that. I think we are bound to achieve price stability. That’s part of our mandate.

That’s not the only concern. Average inflation targeting could theoretically support a labor market recovery. If it fails, U.S. households could find themselves trapped in a bit of a nightmare scenario.

As Ed Al-Hussainy, a senior analyst with Columbia Threadneedle, warned in remarks cited by Reuters:

What if we are unlucky and we get high unemployment and inflation over 2%?